An Inferred Mineral Resource containing approximately 680,000 oz AuEq in 7.1Mt grading 3.0 g/t AuEq at cut-off grade of 0.7 g/t AuEq was reported on January 30, 2020. Bulk rougher flotation tests were performed on two composite samples, which yielded head grades of 2.04 g/t Au and 10.99 g/t Au and gold recoveries to concentrate of 88.2% and 90.5%, respectively. The same composite samples yielded silver head grades of 15.1 g/t Ag and 107.2 g/t Ag, and silver recoveries to concentrate of 88.2% and 96.4% respectively. All mineralization occurs either at or near surface

Straightforward site access via national and forest roads, ready power availability from adjacent 110 kV and lower voltage transmission lines already supplying the nearby Podvirovi Mine, 30 minutes from the municipality of Bosilegrad, with a population of approximately 8,000.

The Tlamino Project is located near Bosilegrad in the far southeast of Serbia, and consists of two contiguous Exploration Licences, Donje Tlamino and Surlica-Dukat, covering a total area of 192 km2. The Donje Tlamino Licence hosts the Barje Prospect, for which an Inferred Mineral Resource containing approximately 680,000 oz AuEq in 7.1Mt grading 3.0 g/t AuEq at cut-off grade of 0.7 g/t AuEq was reported on January 30, 2020.

Medgold acquired the Tlamino Project in 2016 and over the following three years completed soil sampling, Induced Polarization geophysics, surface and underground channel sampling, returning intervals of 84 meters at 5.6 g/t Au and 105.2 g/t Ag, and 52 meters at 2.20 g/t Au and 88 g/t Ag. Between 2018 and 2019 Medgold completed 55 diamond drill holes at the Tlamino for a total of over 9,000 meters, returning near-surface intervals including 30.0 meters of 5.45 g/t Au, 13.35 meters @ 5.06 g/t Au and 38.20 meters @ 3.98 g/t Au from the Barje Prospect. Mineralization at Barje is near-surface, breccia-hosted, and is developed along the plane of a low-angle fault.

The modern exploration era at Tlamino commenced in the 1950’s when Yugoslav State companies explored the region primarily for lead and zinc. Perhaps most notably, precious metals were not commonly assayed in this period. The property was subsequently explored for gold by Avala Resources in the mid 2000’s, though their drilling appears to have missed the main body of precious metal mineralization.

An Inferred Mineral Resource containing approximately 680,000 oz AuEq in 7.1Mt grading 3.0 g/t AuEq at cut-off grade of 0.7 g/t AuEq was reported on January 30, 2020, and is presented in Table 1. Example cross-section and a block model view of the resource are given in Figure 1. This estimate was prepared in accordance with National Instrument 43-101 (NI 43-101) and CIM Definition Standards by Addison Mining Services Ltd. of the United Kingdom.

Notes to the Mineral Resource Estimate: 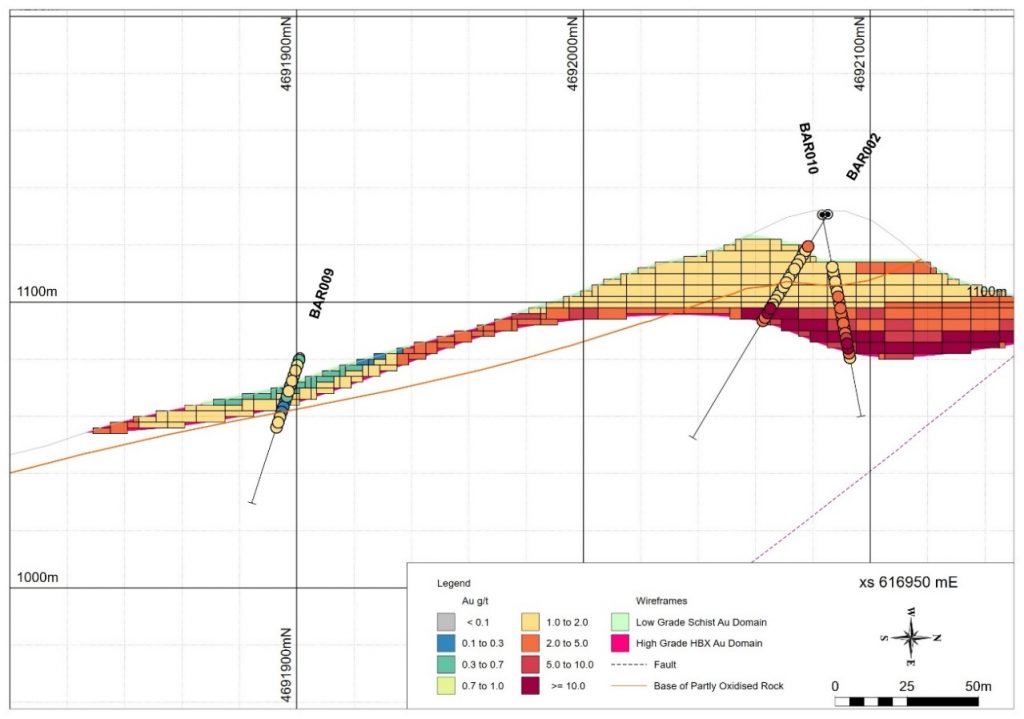 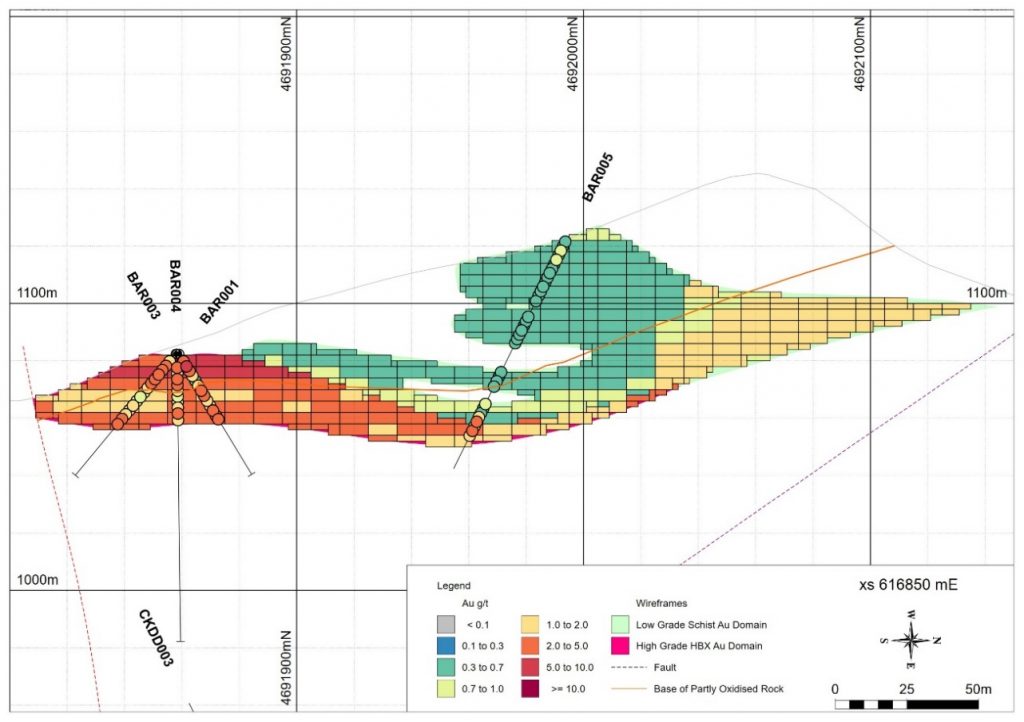 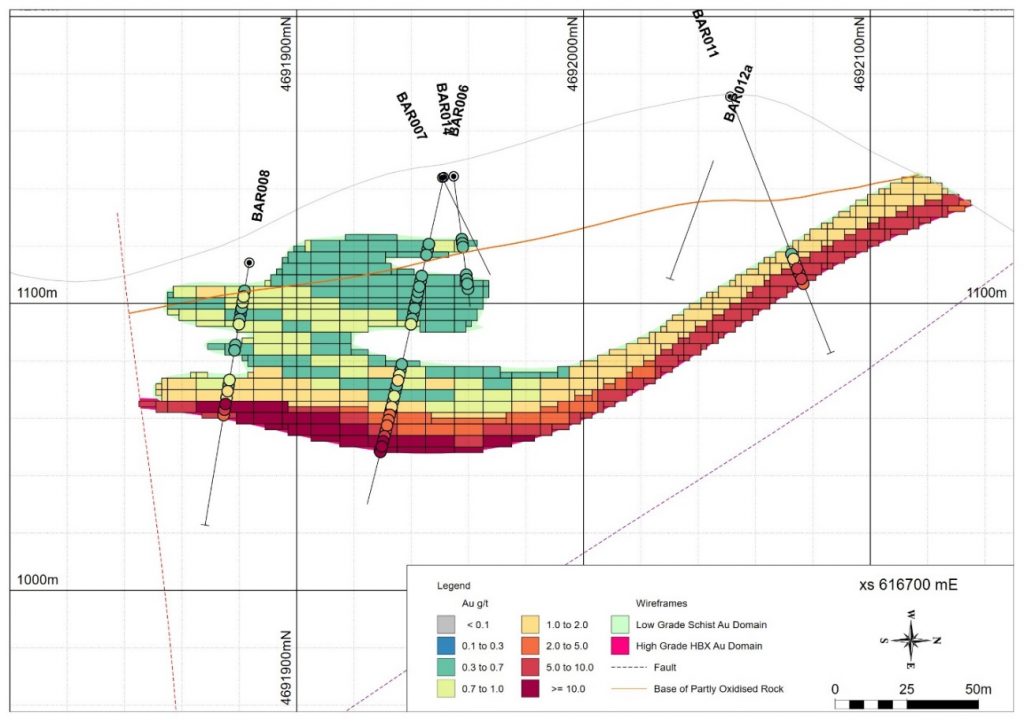 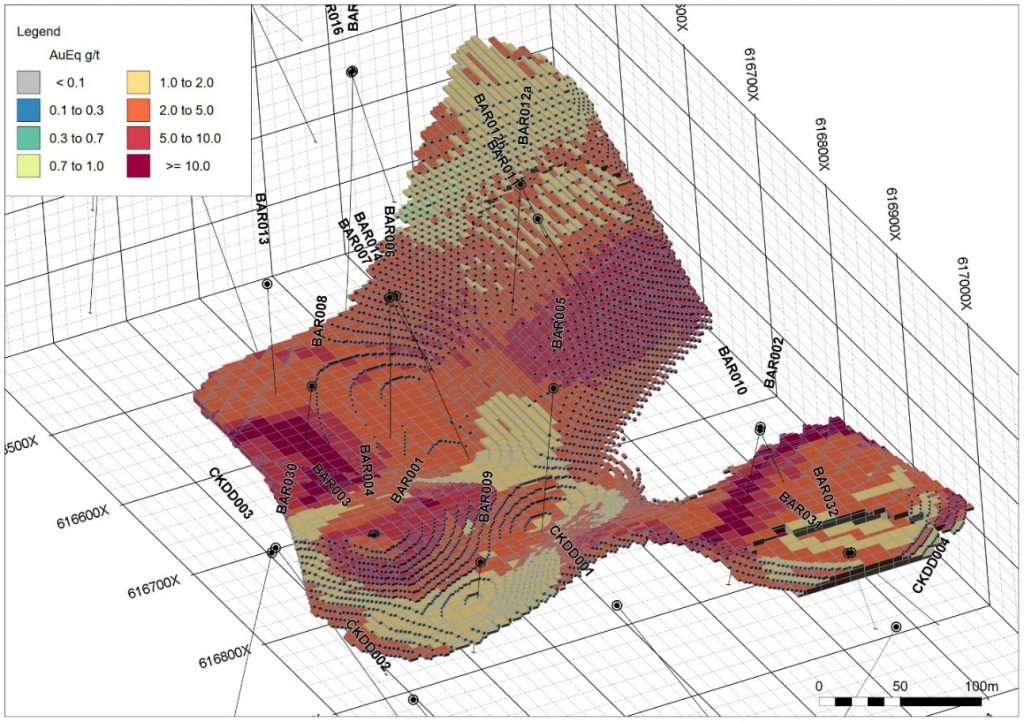 Metallurgical test work for the Mineral Resource Estimate included bulk rougher flotation tests on two composite samples blended from approximately 50 kg of drill core representing medium- and high-grade gold mineralization within unweathered hydrothermal breccias at the Barje Prospect. The composites reported head grades of 2.04 g/t and 10.99g/t Au and gold recoveries to concentrate of 88.2% and 90.5%, respectively. The same composites reported silver head grades of 15.1 g/t Ag and 107.2 g/t Ag, and silver recoveries to concentrate of 88.2% and 96.4% respectively. A summary of these results is presented in Table 2.

The metallurgical test work used conventional flotation methodology at a grind size of -74 microns, a pH of 8.2, a conditioning time of 3 minutes and a flotation time of 9 minutes. Metallurgical analyses were performed by Resource Development Inc. of Wheat Ridge, Colorado, and were overseen by Woods Process Services LLC of Denver, Colorado. Medgold commenced exploration at Tlamino in 2016, since which mapping, extensive soil and channel sampling, Induced Polarization and Electrical Resisivity surveys, and diamond drilling have been completed.

Between May 2018 and October 2019, Medgold completed a 55-hole diamond drilling campaign at the Tlamino Project, comprising testing of targets at the Barje, Liska and Karamanica Prospects.

Drilling at Barje intersected a zone of continuous, tabular, near-surface gold mineralization that is seen to extend 700 meters east-west by 250 meters north-south within a structurally-bound, shallowly-dipping hydrothermal breccia below altered schist, and it was from within this body that the Mineral Resource Estimate was generated. Mineralization at Barje ranges in vertical grade-thickness from 10 to 151 gram-meters and appears to be bounded to its south by a fault. Drilling west of this zone returned only sporadic intervals of gold mineralization. A summary of the collar locations from drilling at the Barje, Liska and Karamanica Prospect is provided in Table 3 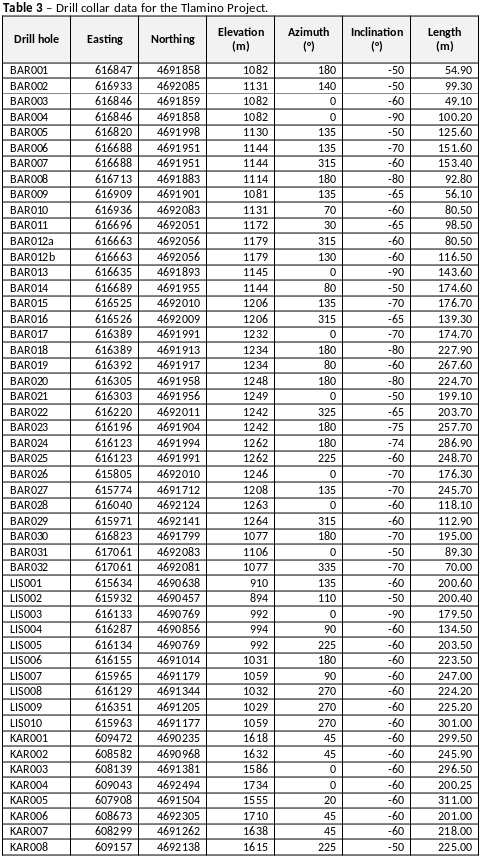 * Coordinates are given in WGS84 datum and UTM zone 34 projection.

The best drill intersections for the Tlamino Project are summarized in Table 4: 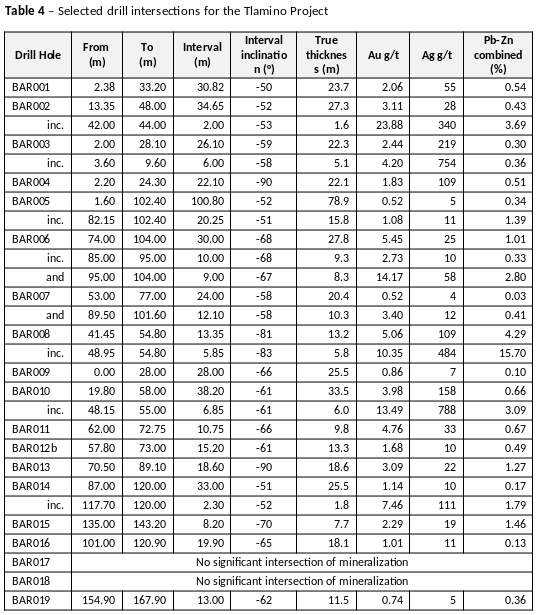 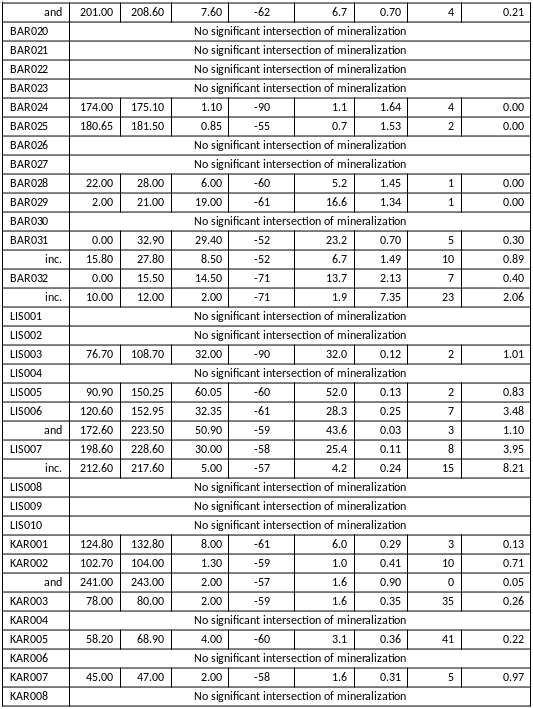 A 39 line kilometer Induced Polarization and Electrical Resistivity survey completed by Medgold, over an rea of approximately 4 km 2 identified a chargeable feature extending to the west of the Barje Prospect beneath cover for over 1 kilometer. While the Discovery Outcrop itself is observable in the chargeability data there does not appear to be a conclusive relationship between gold mineralization and chargeability at the Barje Prospect.

The Tlamino Project is located in the Serbo-Macedonian Massif (“SMM”), a belt of Tertiary -age igneous and metamorphic rocks that runs north-south through Serbia, and into Macedonia, Bulgaria and Greece. In the most general terms, precious and base-metal mineralization occurs in the SMM where the volcanoclastic host rocks of the belt have been intruded by felsic porphyritic units. The contact zones between these intrusive rocks and their hosts are thought to control base and precious metal mineralization in the License area.

Between the 1950’s and the 1970s the Yugoslav government systematically explored the SMM for lead and zinc but not gold, opening up significant exploration opportunity for Medgold.

In Greece, the SMM gives host to a number of gold deposits including the high-grade Skouries Au-Cu porphyry and the Olympias Au-rich polymetallic carbonate replacement deposit, both under development by Eldorado Gold Corporation.

GEOLOGY OF THE TLAMINO PROJECT

The Barje Prospect is the most advanced prospect within the Tlamino Project. It is located on an east-west trending ridge at elevations ranging from approximately 1100 metres in the east to 1300 metres in the west. Historical prospecting located two main areas of outcropping gold and base metal mineralization at Barje, drilling on the margin of these areas by Avala Resources Ltd, targeting steep feeder zones, failed to intersect significant mineralization. Medgold’s drilling has confirmed the continuation of mineralization between and to the west of the discovery outcrops in an area of 700 metres east-west by 250 metres north-south. Said mineralization is controlled by a hydrothermal breccia, of up to 20 metres in thickness, following a structure inclined approximately 18° towards the south. This structure cuts a fault-bounded sequence of schist and conglomerate above a dacite sill intruded along a detachment surface at the top of the basement rocks.

While mineralization is strongest in the hydrothermal breccia, a halo of lower-grade mineralization is also found in the overlying rocks. The hydrothermal breccia comprises transported clasts of the local wall-rocks cemented by a matrix of quartz ± calcite/siderite and sulphide minerals, including pyrite, arsenopyrite, sphalerite, galena and more rarely chalcopyrite and tennantite. Grains of electrum up to around 50 microns in size and containing approximately 60% gold and 40% silver, have been observed microscopically within the higher-grade mineralization.