Vancouver, Canada, September 18, 2019 –Medgold Resources Corp. (TSX-V: MED) is pleased to announce that drilling of its high-priority Karamanica Prospect will commence in the current week. The Karamanica Prospect falls within the Tlamino Project (the “Project” or “Tlamino”) in southern Serbia, approximately 8km west of the Barje-Liska Prospect at which drilling by Medgold has been focused to date. Approximately 2,000m of diamond drilling is planned in this phase of work.  The 2019 exploration program remains fully funded by Fortuna Silver Mines Inc. (NYSE: FSM) (TSX: FVI) (“Fortuna”) and directed by a joint Fortuna-Medgold technical committee pursuant to the terms of the Tlamino Option Agreement announced on March 7, 2017.

The most prominent target at Karamanica consists of a 2km long Induced Polarization chargeability anomaly within a 2km by 1.5km polymetallic soil anomaly. Medgold’s technical team believes that this anomaly may represent the strike extension of a mineralized structure onto Tlamino from underground mine workings at the adjacent Podvirovi Mine currently in development by Mineco Limited.

A historic Mineral Resource Estimate for Podvirovi was listed by Yugoslav State Agencies in 1989 as 2.216 million tonnes at 3.07% Pb, 3.06% Zn and 0.87% Cu in A+B+C1 Resource categories*.  While no systematic gold or silver analyses appear to have been performed by the Yugoslav State Agencies, it is important to note that soil sampling by Medgold along the projection of the Podivirovi trend within the Company’s landholding identified gold in soil of 0.1 g/t over an area of 2km by 1.5km.  Evidence of mineralization on an adjoining property is not itself evidence of mineralization at Tlamino. 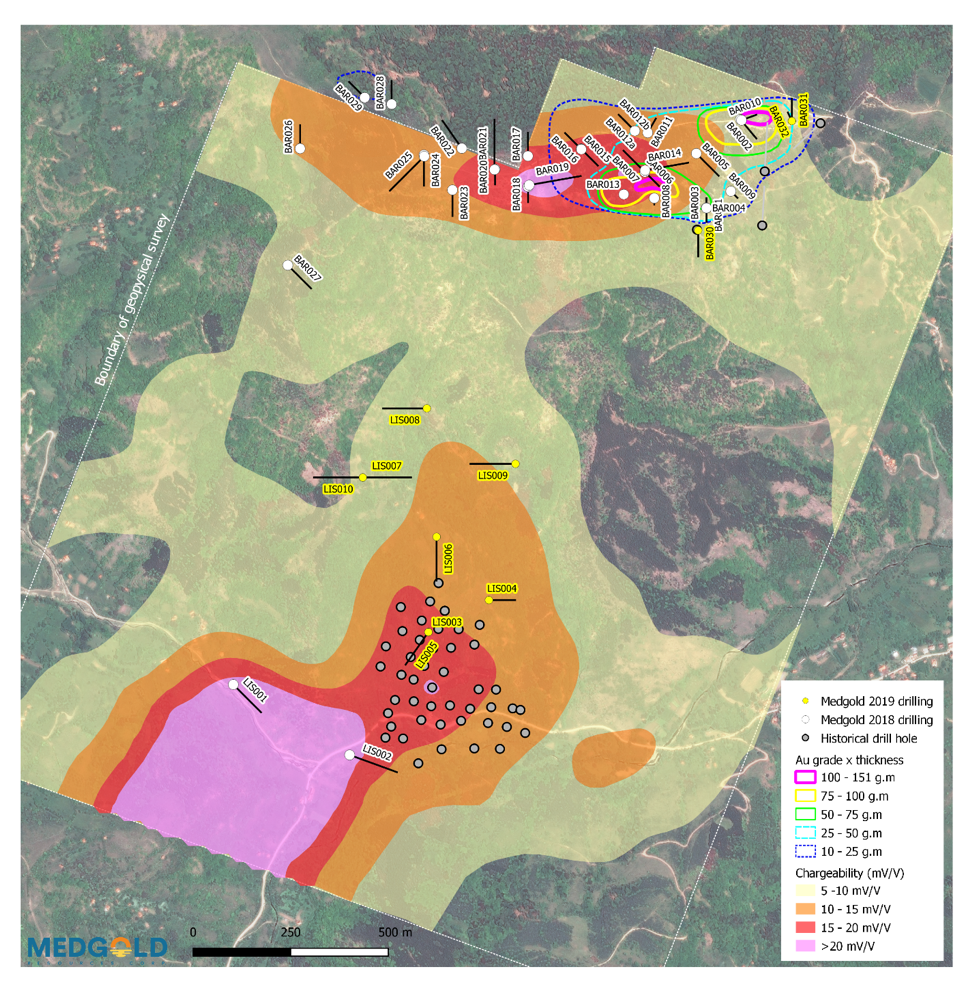 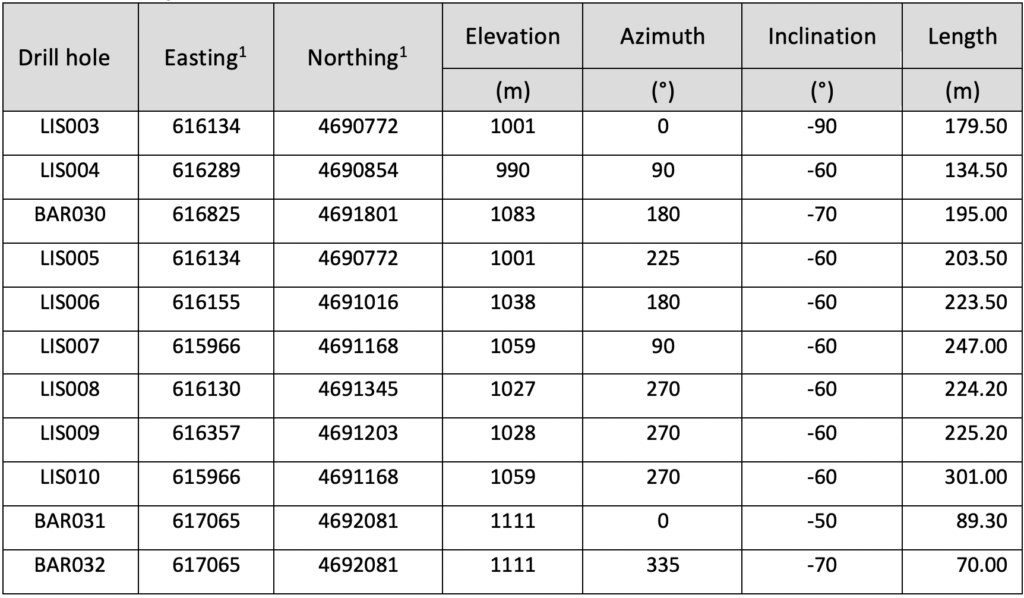 1 – Coordinates are given in WGS84 datum and UTM zone 34 projection.

The Project is located in Southern Serbia, close to the borders of both Bulgaria and Macedonia, five hours south of Belgrade by highway and local roads. Tlamino is comprised of two exploration licenses, Donje Tlamino and Surlica-Dukat, each approximately 100km2.  All exploration work at the Project is fully-funded by Fortuna, which has an option to earn up to 70% of the Project by spending US $8 million on exploration over five years and completing a Preliminary Economic Assessment (see Medgold news release of March 7, 2017).

Medgold is a Serbia-focused, TSX-V listed, exploration company targeting early-stage gold properties in the Oligo-Miocene Belt of Serbia.  Run by an experienced management team with a successful track-record of building value in resource companies, Medgold is aiming to become a leading European gold exploration company.

Mr. Thomas Sant, FGS, CGeol, EurGeol, is a Qualified Person as defined by National Instrument 43-101.  Mr. Sant has a 25-year career in mineral exploration focusing on gold and base-metal projects and has provided consulting services to Medgold since 2017.  Mr. Sant has supervised the preparation of the technical information in this new release and has verified it by reference to the original field and assay data, by inspection of the drill core before and after sampling, by conducting several site-visits during the drilling, by audit of the significant intersection calculations, and by carrying out inspection of the QAQC data.  Mr. Sant approves the disclosure of the technical information in this news release.

Drilling was carried out using PQ3 and HQ3 diameter tooling with core recovery averaging 97 percent for the program.  Cut half-core samples were collected in and surrounding logged intervals of alteration and mineralization with an average sample length of 1.7 m and an average sample mass of 6.4 kg.  Medgold inserted 43 packets of commercial certified reference material, 23 blank samples of coarse-crushed barren granite and 21 core duplicates with the sequence of 575 primary core samples during the program as part of a documented and monitored QAQC system to confirm the reliability of assay results for Au, Ag, Cu, Pb, and Zn.  All samples were delivered directly to the independent laboratory facilities of ALS Geochemistry in Bor, Serbia where samples are crushed and pulverized using method code PREP-31, fire assayed for Au using method code Au-ICP21, and analyzed by ICP for a multi-element suite  using method code ME-MS61 following a four-acid digestion.  Samples reporting over the upper limits of these analysis methods were re-analyzed using an appropriate method.  Review of QAQC data from the program does not suggest any issues that could materially affect the accuracy or reliability of the data referred to by this news release.

Mineral Resources were calculated in former-Yugoslavia according to laws and regulations applicable at that time, defined specifically by “Zakon o jedinstvenom načinu utvrđivanja, evidentiranja i prikupljanja podataka o rezervama mineralnih sirovina i podzemnih voda i o bilansu tih rezervi” (The Law on the Uniform Method of Establishing, Recording and Gathering Data on Reserves of Mineral Raw Materials and Underground Water and Their Balancing), Službeni list SFR Jugoslavije, br. 53/1977; and by “Pravilnik o klasifikaciji i kategorizaciji rezervi čvrstih mineralnih sirovina i vođenju evidenciije o njima” (The Book of Regulations on Classification and Categorization of Reserves of Solid Mineral Raw Materials and Keeping a File on Them), Službeni list SFR Jugoslavije br. 53/1979.