Vancouver, Canada, November 28, 2019 – Medgold Resources Corp. (TSX-V: MED) is pleased to announce the results of metallurgical testwork completed in respect of sample composites obtained from the Barje prospect at its Tlamino Project (the “Project” or “Tlamino”) in southern Serbia.  Further to its news release of October 30, 2019, the Company also reports final results of its 2019 drilling at the Karamanica prospect.

The recoveries indicated by this work were achieved using conventional flotation methodology at a grind size of -74 microns, at a pH of 8.2 over a conditioning time of 3 minutes and a flotation time of 9 minutes.  Metallurgical analyses were performed by Resource Development Inc. of Wheat Ridge, Colorado, and were overseen by Woods Process Services LLC of Denver, Colorado.

Results from the 31 drill holes of the 2018 drilling program show the mineralized zone at Barje to extend 700m east-west by 250m north-south within a structurally-bound, shallowly-dipping hydrothermal breccia below altered schist.  This mineralization ranges in vertical grade-thickness from 10 to 151 meters and appears to be bounded to its south by a fault.

The balance of results from the Company’s 2019 drilling program at the Karamanica prospect have now been received and are presented in Tables 1 and 2 below, and drill hole locations are shown in Figure 1.  Holes KAR002, KAR003, KAR005 and KAR007 targeted the projected continuation of the so-called Podvirovi mineralized structure along strike from KAR001 (see news release dated October 30, 2019) but intersected only weak mineralization, typically hosted in carbonaceous schist with traces of disseminated pyrite and quartz-pyrite veins.

The 2019 exploration program was fully funded by Fortuna Silver Mines Inc. (NYSE: FSM) (TSX: FVI) (“Fortuna”) and was directed by a joint Fortuna-Medgold technical committee pursuant to the terms of the Tlamino Option Agreement announced on March 7, 2017.  A total of 4,089m of diamond drilling in the areas of Barje, Liska and Karamanica were completed by Medgold during its 2019 exploration programs.

Located approximately 8km northwest of Barje, the Karamanica Zone is characterized by a 2km by 1.5km gold-in-soil anomaly in which samples returned values generally above 0.1 g/t gold.  Within this anomaly locally elevated concentrations of Ag, Cu, Pb, Zn, As and Sb are seen to form distinct NW-SE linear features, which are in turn partly co-incident with high values of IP chargeability (see news release of March 21, 2019). 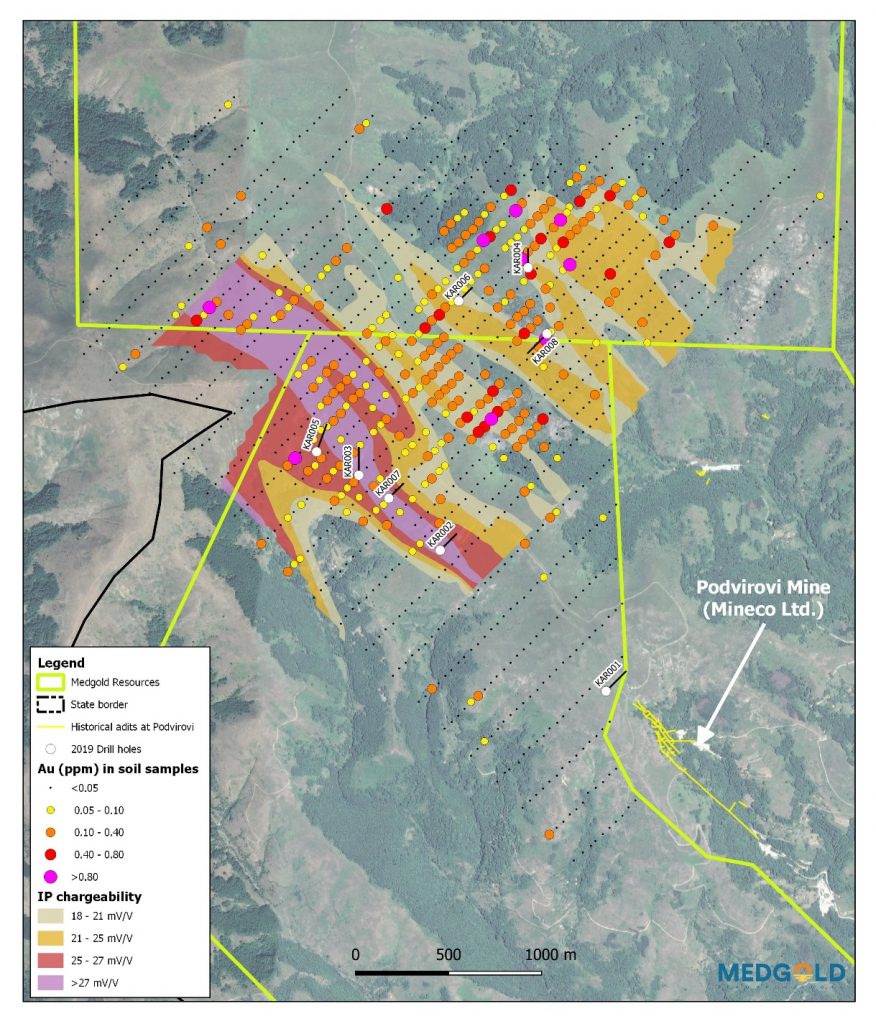 1 – Drill hole inclination and azimuth were surveyed every 30m down the hole with some additional readings in the first and last 30m of each hole. The reported dip uses the surveys within or closest to the reported intersection.

2 – Mineralization at Karamanica is thought to be hosted along structural zones inclined at approximately 70° to the horizontal. The calculated true thickness is regarded as a reasonable estimate of the true thickness of mineralization perpendicular to the structure.

3 – May contain differences due to rounding.

4 – This number has been revised from the news release of October 30, 2019, due to an error in the previous calculation of true thickness.

The Project is located in southern Serbia, close to the borders of both Bulgaria and Macedonia, five hours south of Belgrade by road. Tlamino is comprised of two exploration licenses, Donje Tlamino and Surlica-Dukat, each approximately 100km2. All exploration work at the Project is fully-funded by Fortuna, pursuant to the Tlamino Option Agreement.

The scientific and technical information in this new release has been prepared and approved by Mr. Thomas Sant, FGS, CGeol, EurGeol, who is a Qualified Person (QP)as defined by National Instrument 43-101. Mr. Sant has provided consulting services to Medgold since 2017 and has acted as the Company’s QP since early 2019.

Drilling at Karamanica during 2019 was carried out by independent contractors using PQ and HQ size tooling. Average core recovery for the program was 98%. Within visually identified alteration or mineralization, drill core was cut in half by the Company using a rock saw with one half of the core then taken as a sample for analysis.  Sample intervals were generally between 50 to 200 centimetres producing samples of between 2 to 9 kilograms. Samples were delivered to the independent ALS Geochemistry laboratory facilities in Bor, Serbia. The samples were crushed and pulverized using method code PREP-31, were fire assayed for Au using method code Au-ICP21, and were analyzed for multi-elements using method code ME-MS61 following a four-acid digestion. Overlimits were analyzed using an appropriate method.  The Company routinely inserted multi-element geochemical standards, blanks, and field duplicate samples into the drill core sample stream as part of a documented Quality Assurance/Quality Control (QAQC) process to monitor laboratory performance.

Medgold’s QP has verified that during the 2019 drilling program QAQC material was inserted into sample batches at the following rates per primary sample: ¼ core duplicates 1 in 25; granite blanks 1 in 26; certified reference material (CRM) 1 in 14. All CRMs and blanks submitted within mineralized intervals were verified as having passed the Company’s QAQC controls. Sample grades were checked against recovery percentage for potential bias and no discernable high- or low-grade bias was observed. Medgold’s uses an MX Deposit database for storage of drilling, logging and assay data. Medgold’s QP has verified that interval assay data within the database matches certificates of analysis received from ALS assay laboratories. Additionally, spot-checks were made on interval data recorded during core logging against the archived half-core; no significant discrepancies were noted.