Vancouver, Canada, January 30, 2020 – Medgold Resources Corp. (TSX-V: MED|FRA: 1XD) is pleased to announce a maiden Mineral Resource Estimate for the Barje Prospect within the Tlamino Project (the “Project” or “Tlamino”) in southern Serbia. An Inferred Mineral Resource containing approximately 680,000 oz AuEq in 7.1Mt grading 3.0 g/t AuEq at cut-off grade of 0.7 g/t AuEq is reported, and is presented in Table 1. Example cross-section and a block model view of the resource are given in Figure 1. This estimate was prepared in accordance with National Instrument 43-101 (NI 43-101) and CIM Definition Standards by Addison Mining Services Ltd. of the United Kingdom. A Technical Report for the Project will be filed on www.sedar.com within 45 days.

Medgold is also pleased to announce the initial results of metallurgical test work. Bulk rougher flotation tests were performed on two composite samples which, formed of 50.39 kg of core from the Company’s 2018 drilling program at the Barje prospect, yielded head grades of 2.04 g/t Au and 10.99 g/t Au and gold recoveries to concentrate of 88.2% and 90.5%, respectively. The same composite samples yielded silver head grades of 15.1 g/t Ag and 107.2 g/t Ag, and silver recoveries to concentrate of 88.2% and 96.4% respectively. A summary of these results is presented in Table 2.

The 2019 exploration program was fully funded by Fortuna Silver Mines Inc. (NYSE: FSM) (TSX: FVI) (“Fortuna”) and was directed by a joint Fortuna-Medgold technical committee pursuant to the terms of the Tlamino Option Agreement announced on March 7, 2017. Pursuant to the terms of said Agreement, as later amended, Fortuna has earned a 51% interest in the Project having spent US$3 million in exploration expenditures.

Notes to the Mineral Resource Estimate:

Metallurgical test work for the Mineral Resource Estimate included bulk rougher flotation tests on two composite samples blended from approximately 50 kg of drill core representing medium- and high-grade gold mineralization within unweathered hydrothermal breccias at the Barje Prospect. The composites reported head grades of 2.04 g/t and 10.99g/t Au and gold recoveries to concentrate of 88.2% and 90.5%, respectively. The same composites reported silver head grades of 15.1 g/t Ag and 107.2 g/t Ag, and silver recoveries to concentrate of 88.2% and 96.4% respectively. A summary of these results is presented in Table 2.

The metallurgical test work used conventional flotation methodology at a grind size of -74 microns, a pH of 8.2, a conditioning time of 3 minutes and a flotation time of 9 minutes. Metallurgical analyses were performed by Resource Development Inc. of Wheat Ridge, Colorado, and were overseen by Woods Process Services LLC of Denver, Colorado.

The Tlamino Project covers an area of approximately 200km2 in southern Serbia and is held by Medgold under two exploration licenses. Outcropping mineralization was first observed at the Barje Prospect by Yugoslav State agencies in the 1950s and 1960s when a short adit was opened but no drilling was carried out. The prospect was then held by private and public companies between approximately 2005 and 2012 during which time limited drilling failed to intersect significant mineralization.

Medgold conducted mapping, surface sampling and geophysics (IP) followed by diamond drilling at the Barje Prospect in 2018 and 2019 which successfully intersected gold mineralization in a shallowly inclined body of hydrothermal breccia below altered schist (as announced on March 21, 2019). The Inferred Mineral Resource at the Barje Prospect extends from surface to a depth of approximately 110m as a shallowly inclined zone over an area of approximately 600 m x 350 m. The true thickness of mineralization generally ranges between 10 m to 40 m. 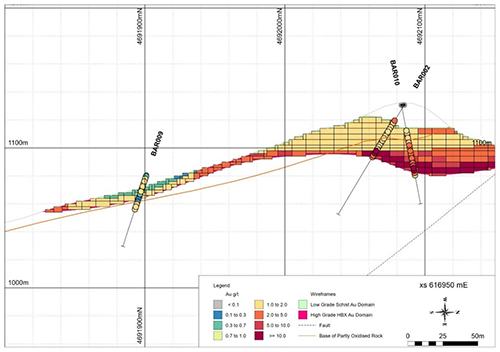 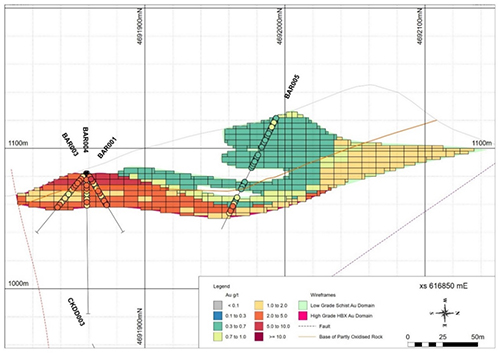 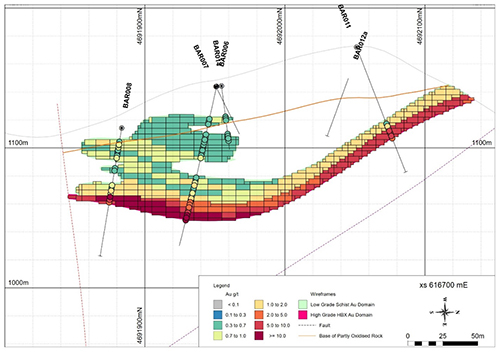 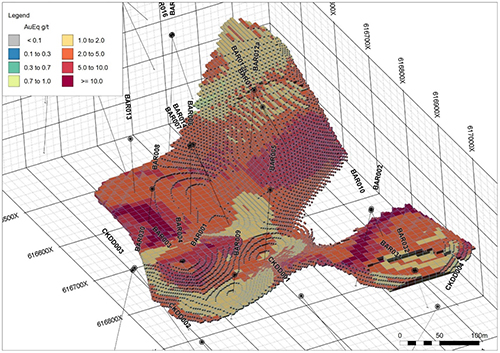 Mr. Thomas Sant, FGS, CGeol, EurGeol, Consultant Exploration Manager for Medgold and Qualified Person as defined by NI 43-101 has reviewed and approved the scientific and technical content of this news release. Mr. Sant is not independent of the Company.

The independent Qualified Person for the MRE, as defined by NI 43-101, is Mr. Richard Siddle, MSc, MAIG, of Addison Mining Services Ltd.

Medgold is a TSX-V listed, gold exploration company targeting early-stage properties in the Balkan region. Run by an experienced management team with a successful track-record of building value in resource companies, Medgold is focused on growth through fast-paced exploration and resource definition in the prospective and under-explored Balkan region.

Certain statements contained in this news release constitute forward-looking statements within the meaning of Canadian securities legislation. All statements included herein, other than statements of historical fact, are forward-looking statements and include, without limitation, statements about the mineral resource estimate for the Tlamino Project. Often, but not always, these forward looking statements can be identified by the use of words such as “estimate”, “estimates”, “estimated”, “potential”, “open”, “future”, “assumed”, “projected”, “used”, “detailed”, “has been”, “gain”, “upgraded”, “offset”, “limited”, “contained”, “reflecting”, “containing”, “remaining”, “to be”, “periodically”, or statements that events, “could” or “should” occur or be achieved and similar expressions, including negative variations.

Forward-looking statements involve known and unknown risks, uncertainties and other factors which may cause the actual results, performance or achievements of the Company to be materially different from any results, performance or achievements expressed or implied by forward-looking statements. Such uncertainties and factors include, among others, the uncertainties inherent in the estimation of mineral resources; changes in general economic conditions and financial markets; the Company or any joint venture partner not having the financial ability to meet its exploration and development goals; risks associated with the results of exploration and development activities, estimation of mineral resources and the geology, grade and continuity of mineral deposits; unanticipated costs and expenses; and such other risks detailed from time to time in the Company’s quarterly and annual filings with securities regulators and available under the Company’s profile on SEDAR at www.sedar.com. Although the Company has attempted to identify important factors that could cause actual actions, events or results to differ materially from those described in forward-looking statements, there may be other factors that cause actions, events or results to differ from those anticipated, estimated or intended.