Vancouver, Canada, April 20, 2020 – Medgold Resources Corp. (TSX-V: MED|FRA: 1XD) is pleased to announce that it has entered into an exclusive Letter Agreement with Gecon EOOD with respect to an Exploration License application made by Gecon at Zlogosh (“Zlogosh”, the “Zlogosh Property”), Kyustendil Oblast, western Bulgaria. The main mineralized targets at Zlogosh are situated approximately 40 kilometers by road from Medgold’s Tlamino Project in Serbia, with which they appear to share considerable geological similarity. The location of Zlogosh relative to the Tlamino Project is shown in Figure 1.

Subject to satisfactory completion of due diligence, Medgold is planning to conduct drilling and other exploration activities at Zlogosh targeting a Mineral Resource of a similar order – or greater – than that seen at the Tlamino Project (see Medgold News Release dated January 30, 2020). Extensive historical datasets of stream sediment, soil and rock samples are available for Zlogosh, and Medgold intends to apply its understanding gained in similar exploration at Tlamino to these highly prospective targets. Medgold remains committed to the advancement of the Tlamino Project in parallel with activities at Zlogosh.

Under the terms of the Letter Agreement, Medgold has the right to complete certain due diligence activities in regard to Zlogosh which, if satisfactory, give Medgold the right to enter into an Option Agreement with Gecon EOOD. The Letter Agreement provides that said Option Agreement allows Medgold to earn an initial 51% interest in Gecon EOOD by financing approximately €330,000 in permitting and permitting-related expenditures, followed by a second option to earn a further 44% interest in Gecon EOOD by incurring approximately €650,000 in exploration expenditures. The remaining 5% interest in Gecon EOOD may be purchased by Medgold for €200,000 in cash on the third anniversary of the Zlogosh Exploration License once awarded or, at the election of the residual shareholder, for €200,000 in shares of Medgold subsequent to the attainment of exploration expenditures to the value of €1,000,000. Gecon EOOD is a private company incorporated under the laws of the Republic of Bulgaria.

Figure 1: Location of the Zlogosh Property relative to the Tlamino Project 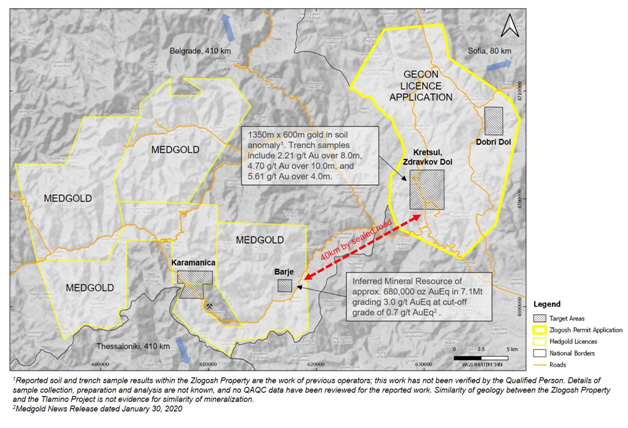 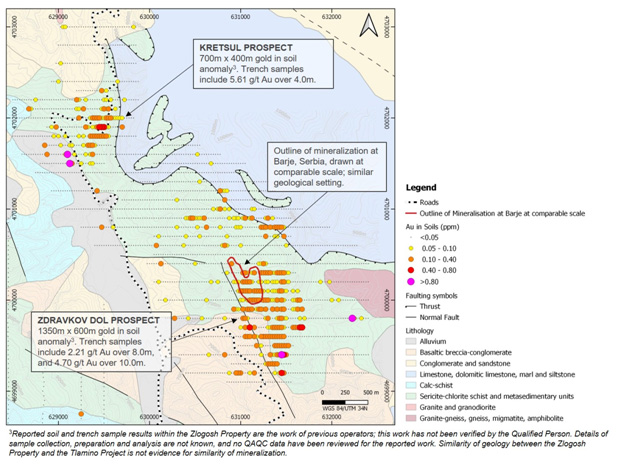 Medgold holds two exploration licenses at Tlamino Project covering an area of approximately 200km2.  Outcropping mineralization was first observed at the Barje Prospect by Yugoslav State agencies in the 1950s and 1960s when a short adit was opened but no drilling was carried out. Between approximately 2005 and 2012, the prospect was held by private and public companies which carried out limited drilling but failed to intersect significant mineralization.

In 2018 and 2019, Medgold conducted mapping, surface sampling and geophysics (IP) followed by diamond drilling at Barje which successfully intersected gold mineralization in a shallowly inclined body of hydrothermal breccia below altered schist (See Medgold news release dated March 21, 2019). The Inferred Mineral Resource at the Barje Prospect extends from surface to a depth of approximately 110m as a shallowly inclined zone over an area of approximately 600m x 350m. The true thickness of mineralization generally ranges between 10m to 40m. A total of 4,089m of diamond drilling in the areas of Barje, Liska and Karamanica were completed by Medgold during its 2019 exploration programs.

Mr. Thomas Sant, FGS, CGeol, EurGeol, Consultant Exploration Manager for Medgold and Qualified Person as defined by NI 43-101 has reviewed and approved the scientific and technical content of this news release.

Medgold is a TSX-V listed, gold exploration company targeting early-stage properties in the Balkan region.  Run by an experienced management team with a successful track-record of building value in resource companies, Medgold is focused on growth through fast-paced exploration and resource definition in the prospective and under-explored Balkan region.

Certain statements contained in this news release constitute forward-looking statements within the meaning of Canadian securities legislation.  All statements included herein, other than statements of historical fact, are forward-looking statements and include, without limitation, statements about the Company’s plans for the Zlogosh Property.  Often, but not always, these forward looking statements can be identified by the use of words such as “estimate”, “estimates”, “estimated”, “potential”, “open”, “future”, “assumed”, “projected”, “used”, “detailed”, “has been”, “gain”, “upgraded”, “offset”, “limited”, “contained”, “reflecting”, “containing”, “remaining”, “to be”, “periodically”, or statements that events, “could” or “should” occur or be achieved and similar expressions, including negative variations.

Forward-looking statements involve known and unknown risks, uncertainties and other factors which may cause the actual results, performance or achievements of the Company to be materially different from any results, performance or achievements expressed or implied by forward-looking statements.  Such uncertainties and factors include, among others, whether the Company’s plans for the Zlogosh Property will proceed as anticipated; the uncertainties inherent in the estimation of mineral resources; changes in general economic conditions and financial markets; the Company or any joint venture partner not having the financial ability to meet its exploration and development goals; risks associated with the results of exploration and development activities, estimation of mineral resources and the geology, grade and continuity of mineral deposits; unanticipated costs and expenses; and such other risks detailed from time to time in the Company’s quarterly and annual filings with securities regulators and available under the Company’s profile on SEDAR at www.sedar.com.  Although the Company has attempted to identify important factors that could cause actual actions, events or results to differ materially from those described in forward-looking statements, there may be other factors that cause actions, events or results to differ from those anticipated, estimated or intended.